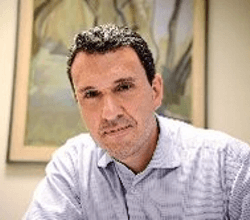 Before his diplomatic career, he was advisor to the Deputy Governor of the Agricultural Bank of Greece.

A career Foreign Service Officer (Economic Diplomacy) dealing with international business and commercial diplomacy, he has served as:

Dr. Andreas Papastamou is Associate Professor of European Economy at the Department of International and European Studies of Panteion University, Athens, and he is teaching Economic Diplomacy as Visiting Professor at the National School of Public Administration, Athens, Greece.

With more than 25 years’ experience in Economic Diplomacy at the Ministry of Foreign Affairs of Greece, in Regional Development programs management, and in Educational Institutions Management, he has published more than forty (40) publications in scientific foreign journals.

His most recent books include:

2. In the Shadow of the European Economic Crisis: Best Practices for Continuing Education, from A. Szpaderski & M.J. Urick (eds.). Management and Welfare: Applications and Theories of Leadership for the Economy, State, and Healthcare. HPL Publications, Inc., Douglassville 2018, (ISBN: 978-1-61305-018-7).

9. Network theory and town twinning: implications for urban development policy in post-socialist Europe, from T. Michalski & A. Kuczabski (2010) Selected Aspects of Transformation in Countries of Central and Central-Eastern Europe. A Book dedicated to Professor Oleh Sabliy upon the 50th Anniversary of Scientific Work. Pelpin: Bernardinum, 2010 (ISBN 978-83-7380-816-4).