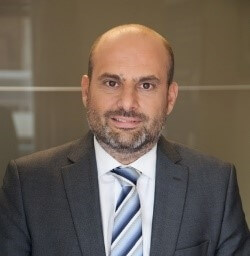 Angelos Binis was born in Athens in 1974. He is a graduate of the Law School of the National and Kapodistrian University of Athens (E.K.P.A.), holds a Master’s Degree (LL.M.) from the University of Bristol (UK) and a PhD candidate from the Department of Political Science and Public Administration of the E.K.P.A. on the subject of thesis: Internal control in the public sector and democratic accountability.

In 2001 he was hired, following a written competition of the A.S.E.P., at the Ministry of Foreign Affairs. From 2004 to 2006 he studied at the National School of Public Administration and Government and as part of his exercise he was placed in the Office of the General Inspector of Public Administration (G.E.D.D.). Upon graduating from the E.S.D.D.A., he chose to be appointed to the General Accounting Office of the State (G.L.K.), where he initially served as auditor in a Financial Control Service (H.D.E.) and then to the Committee for Financial Control Co-financed by the EU Programs (E.D.EL.).From 2007 to 2014 he served in the Corps of Inspectors-Public Administration Auditors (S.E.E.D.D.), initially as Assistant Inspector-Controller, then as Inspector-Controller, and finally as Chief Inspector. In March 2014, he was seconded to the Permanent Greek Representation to the Organisation for Economic Cooperation and Development (OECD), where he served until August 2015.

During the period 2015-2019 he worked, following an international competition process, as an analyst (Policy Analyst-Portfolio Manager) on issues of transparency and the fight against corruption in the OECD, in the Public Governance Directorate/Integrity Unit of the Public Sector. He has worked as a head or member of a project team on missions to enhance transparency and integrity in Europe (Slovakia, Italy, Germany, Greece), Latin America (Mexico, Peru, Colombia, Argentina, Chile, Brazil), North Africa & Middle East (Tunisia, Morocco, Algeria, Egypt, Lebanon, Jordan, Palestine, Kuwait, Qatar, Bahrain, Oman) and Asia (Kazakhstan, Thailand, Indonesia).

He is the lead author or has co-authored more than 25 publications (reviews, reports, manuals) of the OECD on transparency, integrity, internal control and the fight against corruption in English and French, while some of these publications have been translated into Spanish and Arabic. He was also a key member of the elaboration team for the Recommendation of the Council on Public Integrity (2017).

In the context of his professional activity, he has organised and led many actions to train and upgrade the skills of senior public officials, researchers, auditors and inspectors, coming from 35 different countries and non-membersof the OECD, while he has participated as a keynote speaker in international conferences and workshops.

His scientific interest and professional engagement focus on the development and evaluation of frameworks and policies of public integrity and the fight against corruption. In particular, it deals with the evaluation of Internal Control Systems, Anti-Fraud Frameworks, Corruption Risk Management and Internal Audit. He also has extensive experience in public procurement, public procurement, health and welfare services, state frameworks for private and public investment, corporate governance, public sector reform, administration and evaluation of public organisations.

He is fluent in English and French and has a basic knowledge of German.

He is married and has two children.